For the first quarter, I cleared up a wacky start.  For the second quarter, I predicted the remainder of the season from scratch.  By the third quarter, playoffs is where it’s at.  There are only 5 games left for every team.  Some of these games could decide key playoff scenarios.  Here are the current playoff pictures. 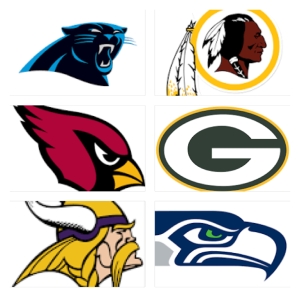 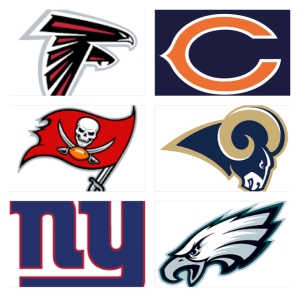 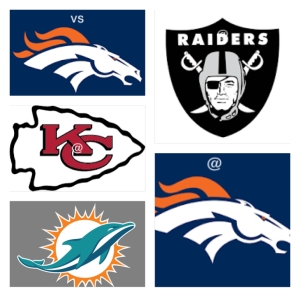 This schedule spells disaster.  Any win over Denver is doubtful.  Denver  likely will dominate up until January.

The Chiefs are practically on fire.  They should’ve beaten them when they had the chance.  They could’ve beat the Chiefs in San Diego, but on the road, it will be extremely difficult.  They’re even hotter now.

Unless the Raiders collapse before Week 16, the Chargers will lose that too.  They lost to them at home, they should lose to them on the road.  The only winnable game is hosting the AFC East’s Miami Dolphins.  Miami is placed last in the AFC East, and the Chargers play them in San Diego.  But one more win only gets them to
4-12.  You need AT LEAST, like 7 to go to the playoffs, and that rarely even happens, although it might to another team this year.

This is actually a decent schedule, but it has a tough two weeks in the AFC East.  One at the Jets, another against the mighty, but injury plagued New England Patriots.  The Jaguars and Texans games are winnable, although the game at the Colts could also be tough.

But besides the Pats, unlike San Diego, there aren’t many dominant teams they face.  But what draws me away from this team is their performance so far.  When you’re 2-9, even three or four wins isn’t enough for playoff contention, and that’s even highly questionable.

Cleveland Browns, 2-9 – Potential, but are practically mathematically out from previous performance

Baltimore Ravens, 4-7 – Too injury-filled to survive.

This is a pretty easy schedule, but there are a couple of games that I wouldn’t quite say are locks.  The Panthers are 11-0, and even beating them in New Orleans will be tough.  The Bucs are getting better and are actually in the playoff hunt now, led by Jameis Winston.  They beat the Saints in New Orleans, Week 2.

The Lions and Jags aren’t as bad as we originally thought, and the Lions are red hot.  And against such a feast or famine team, the Falcons could easily win.  So, the Saints could win the rest (9-7) or even lose the rest (4-12).

The Eagles have a winnable schedule, but they only have a shot at the playoffs if they play really well and have some good luck.  I think the home games vs the Bills and Redskins could easily be wins.  They will likely lose this week, but if they win those two, plus crucial grudge matches vs the Cardinals and Giants, which will be tough if they keep playing how they’re playing, they won’t do, they’ll have a shot.  But to make the playoffs, you need to be Carroll and make sure to win at leat four of the remaining games, (hopefully the loss is to the Pats ☺️).

Detroit Lions, 4-8 – Heating up, but really need to take it to the next level

Miami Dolphins, 4-7 – Beginning to blow it, but still have a shot in best case scenario

The Buccaneers do definitely have potential, and that’s why they’re all the way up here.  But overall, this is a tough schedule.  St. Louis is still decent, Jay Cutler is looking young again, and Carolina is on an undefeated campaign that may never be stopped.  The best chance at wins are the next two weeks (vs ATL and NO).  Both of those teams are utterly struggling.  They could also beat the Bears in Tampa.  They won’t necessarily win all three of those.  They need to to even have a shot. 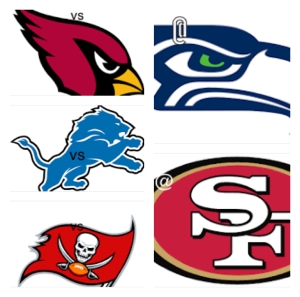 The Rams do have a pretty respectable schedule.  The issue is,they have to win almost all of these to get a spot.  It’s a good schedule.  If they can upset Arizona this week, and win 3 of the 4 games after that.  They may have some tough trips, but it’s do-able.

Chicago Bears, 5-6 – Jay Cutler and Forte are dominating, John Fox is a great coach, they have a chance

Oakland Raiders, 5-6 – They just need to revamp the offense

Fighting For A Spot

This will be a tough schedule to overcome.  It includes two meetings with the 11-0 Panthers, an easier home game vs the Saints, and semi-tough games in Tampa Bay and Jacksonville.  They may be able to defeat the Panthers at home, but doing it in Carolina will be hard.  With the way this team is struggling, I get Tampa and the Jags will beat them, while they beat the Saints, and maybe Carolina if they’re lucky.

The Colts have a somewhat easy schedule, but they have to take it like the schedule says @NE 5 weeks in a row.  The Texans, Jaguars and Steelers are improving and could easily knock down Indy.  Normally, at this point in the season, the Colts would be top contenders, but they lost their groove somehow this year.  The Dolphins game could even be tough.  But winning 2 or 3, which they can easily do, can win them this weak AFC South.  So, don’t overlook this schedule, and still try hard. 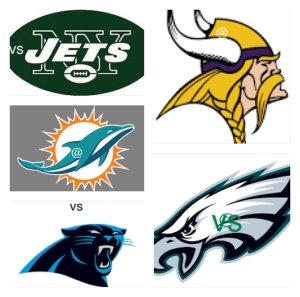 The Giants were NFC East leaders a couple weeks ago, but a tough late season schedule has slowed them down, and the Redskins, hopefully temporarily, have stolen their throne.
Home games against the Eagles and Jets could be among THE EASIEST games to win for the Giants.  I also think they can bull over Carolina and prevent an undefeated season.  But if those are the easiest, what is the toughest?  Oh no.  Vikings in Minnesota, Dolphins in Miami.  Those could be dangerous games.  They could win anywhere between 1 and 4 games, and for a 5-6 team, they need to be on the higher side of that, even in such a weakling division.

Seattle Seahawks, 6-5 – Beginning to get it together

Houston Texans, 6-5 – Brian Hoyer is back in good hands

Pittsburgh Steelers, 6-5 – Despite some injuries, are still relevant with Baltimore done

New York Jets, 6-5 – If what happened in Week 12 continues, they can regain their groove

For these teams, rather than looking over the schedule, we’ll break down clinching scenarios

The Pats can clinch the division by simply winning, and making sure the Giants beat the Jets.  As Pats fans, we yes, have to root for Tom Coughlin’s New York Giants.  To clinch a playoff berth, they need to win, and the Bills need to win.  Come on Giants, don’t blow it just because you’re doing us a favor.

If the Cardinals beat the Rams, and Seattle loses to the Vikings, all Arizona needs to clinch a spot is the same thing next week or a win when they host Seattle in Week 17.  But beating the Rams today could be a challenge.  Remember, the Rams are also still in the playoff hunt, and when the Cardinals hosted them, they knocked down a 3-0 undefeated season to happen.  They’ve only lost one game since!!!  You think it’ll be easy in St. Louis, and despite the worse record, with Todd Gurley already discovered?!!!  That’s a real challenge for Arizona.  So they better try hard to do well these next couple weeks if they want to ink the division.

I think that Denver will clinch the AFC West today.  I bet they’ll beat the Chargers up, and the Raiders get an easy win over Kansas City.  They have the tiebreaker over Oakland, so that’s not an issue either.  The playoffs are near for Denver and four other great teams.

Cincinnati Bengals, 9-2 – Could easily clinch a playoff berth, in a lock match-up

Minnesota Vikings, 8-3 – Getting there, just need a couple more wins

Green Bay Packers, 8-4 – If they keep it up, they could be back in clinching mode in no time.

So, that’s how the playoff scenarios are looking.  What do you think will happen? Tell me in comments.