3-0 Red Sox.  The Mariners’ best hitter, Robinson Cano, was up.  He hits a high fly ball to deep center.  It nearly hits the wall for a huge double, but Jackie Bradley Jr. jumps up to save it!  The next inning, Bradley crushed a dinger to center.  Good defense led to good offense. 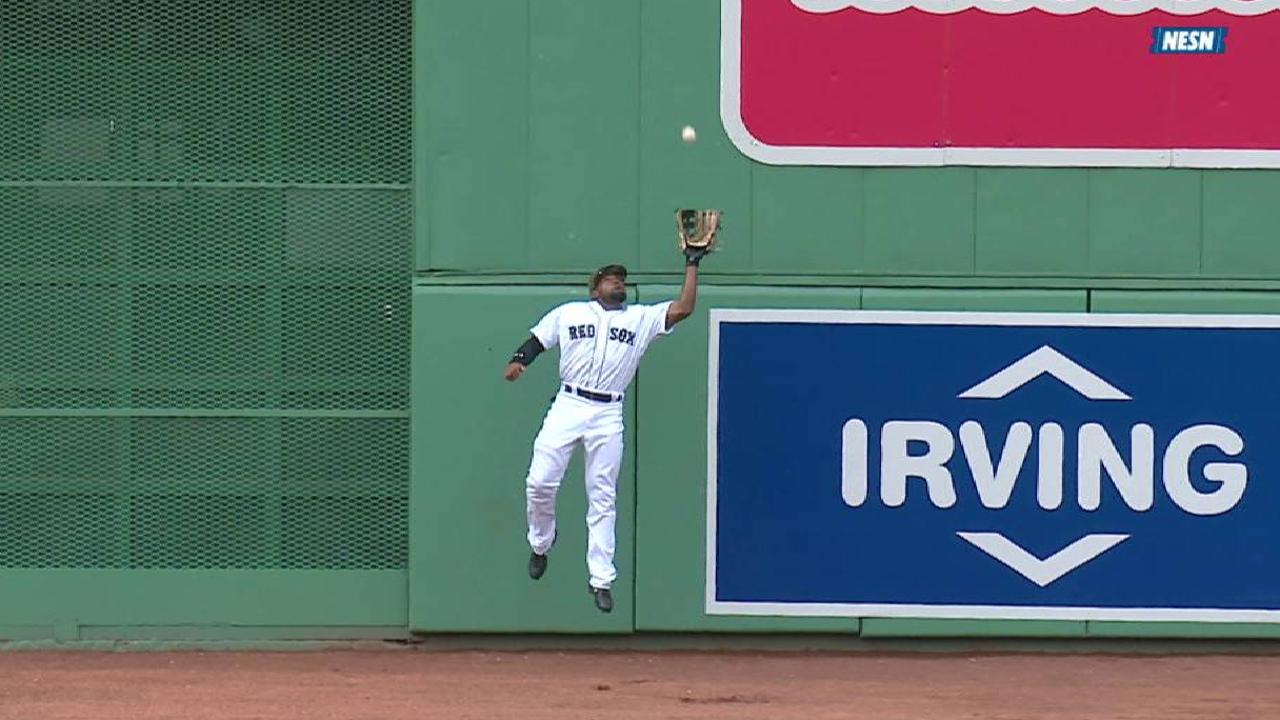 Brian Johnson also pitched a complete game shutout, striking out 8 and giving up no walks and just 5 hits.

The Red Sox started to score in the bottom of the 1st.  Betts walked, and Pedroia was hit on the arm.  Mariners pitcher Rob Whalen was out of control in his first start of 2017.  Xander Bogaerts knocked Betts in on a RBI single, but Pedroia was out at third.  Whalen continued to struggle as Benintendi hit a single to knock in Bogaerts.  Hanley Ramirez was also hit, and Whalen looked exhausted after walking one, hitting two and giving up two hits.  Ramirez stole second as Whalen walked JBJ.  It was 2-0 Red Sox, and they weren’t done.  Sandy Leon hit a single to drive in Benintendi.  However, Ramirez tried to score and was ruled out.  3-0 after 1 inning.

Meanwhile, Brian Johnson was on fire, and he was being backed up by good defense.  Mookie Betts saved a home run ball in the 4th, and JBJ made a leaping catch in the 6th.   In the bottom of that inning, Mitch Moreland singled to right, and JBJ hit a two-run shot to left.  5-0 Red Sox.  Brian Johnson continued to do well.  He finished his 4th 1-2-3 inning of the game in the 8th and the Red Sox scored one more run in the bottom of the inning.  Hanley Ramirez drove the ball to left for a base hit, and after a wild pitch got Hanley to second, Mitch Moreland hit the RBI single to drive him in.  The Red Sox led 6-0 through 8.

In the top of the 9th, Johnson was still in the game.  He struck out one, and then defense backed him up to end the inning.  JBJ caught Nelson Cruz’s line drive on a diving catch, and he made the catch of the game to wrap it up.  Seager hit another line drive, and JBJ leaped up for another big catch.  The Red Sox won 6-0.  Johnson tossed a complete game, and JBJ and Betts combined for 4 great catches.

The Red Sox now have a 6 game winning streak and Porcello starts today.  Can the streak live on in the series finale against the Mariners?

The Red Sox topped the Rays 6-3 on Saturday.  Chris Sale got the win and is now 4-2 with a 2.15 ERA.  The game started pretty quietly when neither team got a hit in the 1st.  But Chris Sale gave up his first hit in the second to Logan Morrison.  It wasn’t just any hit though, it was a big home run for the Rays and they were on top 1-0.

However, after Sale was a machine in the 3rd, striking out the side, the Red Sox bit back when Mookie Betts nailed a 2-run homer over the monster. 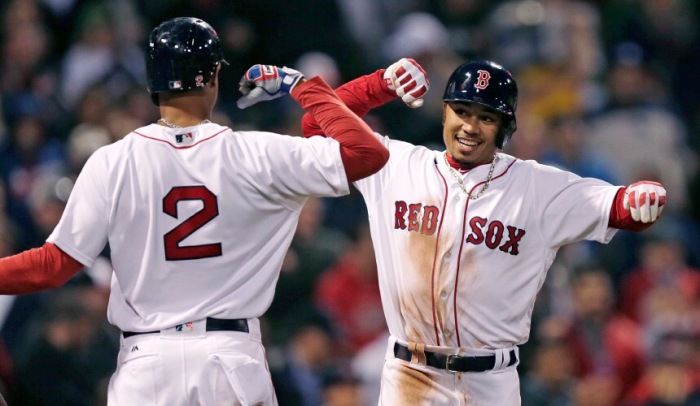 Sale did not give up another hit until the 5th.  But that hit was another home run, this one hit by Kevin Kiermaier!  Sale had only given up 2 hits, but they were both home runs, and the Rays led 3-2.

The Red Sox weren’t going to put up with losing to a team like that though.  Sandy Leon walked again, just as he had before Betts’ dinger.  Then Jackie Bradley Jr., who hadn’t hit a double in 8 months, nailed one off the green monster to put two runners in scoring position.  Then Deven Marrero hit the first double of his career, and it went so high up that it was almost a home run!  Bradley and Leon scored, and the Red Sox were back on top.

Sale finished up the next two innings, then our bullpen took care of the rest.  The Sox won 6-3.  Sale finished with 12 strikeouts, and Joe Kelly and Craig Kimbrel each struck out 2 of the batters in the innings they pitched.

Chris Sale is getting close to breaking a record for most games in a row with double digit strikeout totals.  He’s done it in 7 straight games, and the only other pitchers to do that are Randy Johnson and Nolan Ryan.  Those are Hall of Famers.  If Sale breaks the record, do you think he’ll be inducted later?  I think it’s possible.  Sale has been playing at a better level then Greg Maddux did when he switched teams, so far at least.  Will he burn out later this season, or will his stellar season continue?

Welcome to my April MLB Power Rankings.  Weekly power rankings just became too time consuming but I still wanted to give my say on the current state of baseball every once in a while with my ranks.  Let’s get started.

Note: Records are as of May 2 after all games for that day ended. 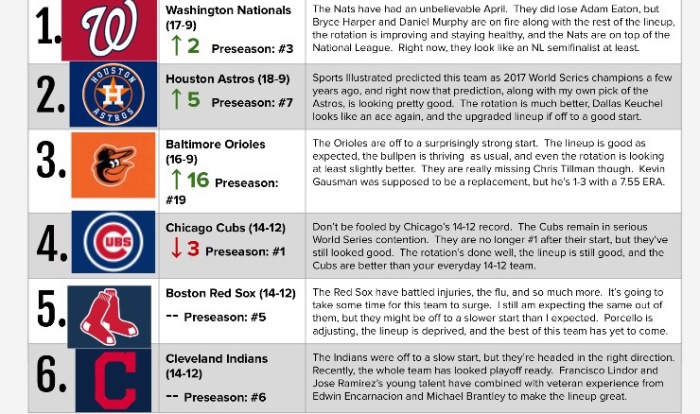 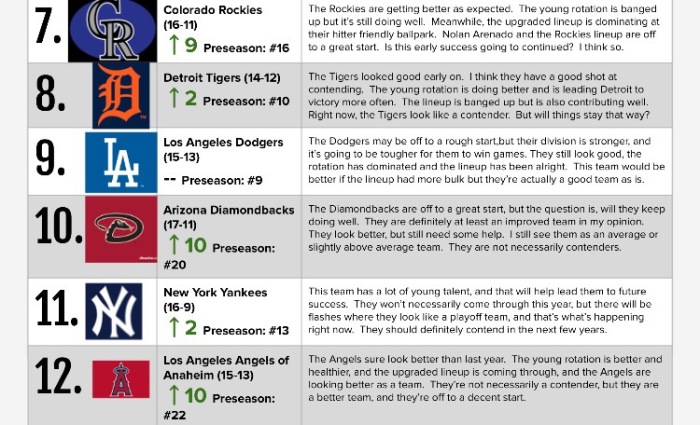