Welcome to my NFL playoff predictions and Wild Card picks. I finished the regular season with a 150-108 record. Below are my wild card weekend picks. How will I do this week? Keep reading and comment with your thoughts.

Before we begin, I’m going to reveal my playoff bracket: 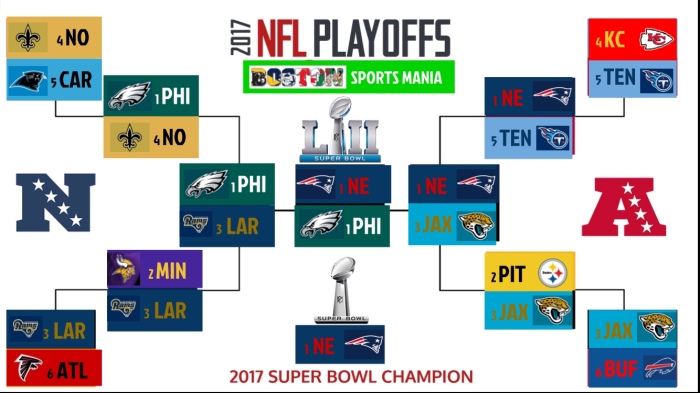 I have the Patriots topping the Philadelphia Eagles in Super Bowl LII. A lot of people have said the Vikings will make the Super Bowl in their home stadium. If they did that, they would be practically invincible. But I think RB Todd Gurley will lead the Rams past them in Minnesota, and the Rams will fall short in Philly, allowing Philly to advance to Super Bowl LII, losing to New England.

Now here are my picks for this week:

Titans QB Marcus Mariota and his group of versatile receivers will be dominant against the Chiefs secondary, who is still without S Eric Berry. But the Chiefs will make it close. They will shut down Titans running backs DeMarco Murray and Derrick Henry, and they will be competitive offensively. WR Tyreek Hill will outsmart the young Titans secondary, as well as star TE Travis Kelce. But in the end, Mariota will lead the Titans to victory, as the Chiefs fall just short.

Atlanta will fall short in LA. RB Todd Gurley will overtire the Falcons front seven in a dominant game. QB Jared Goff will also do well, tossing a trio of touchdowns. The Rams defense will also help, shutting down Atlanta’s running back duo of Devonta Freeman and Tevin Coleman. WR Julio Jones will have a good game, but it will not be enough in Los Angeles.

The Jaguars defense will dominate here, slowing down a strong group of Bills receivers with their young, elite secondary. They will also slow down star running back LeSean “Shady” McCoy. The Jaguars will also contribute offensively although QB Blake Bortles will be under a lot of pressure. RB Leonard Fournette will do well against the Bills defensive front though, and Jacksonville’s young receivers will outdo the Bills stingy secondary.

QB Drew Brees and his versatile receivers will lead the Saints to victory here. They will dominate against the young, inexperienced Carolina secondary although the tough Panthers front seven will shut down the Saints RB duo. But the New Orleans defense will also do well, overwhelming QB Cam Newton, shutting down the strong Carolina run game, and holding Carolina to just one TD. The Saints defense has significantly improved since last season. They support the dominant offense, and that will bring New Orleans a successful playoff run as they win here at home.

That’s all for my playoff Predictions and wild card picks. Check back next week for my updated divisional round picks. In addition, stay tuned for my predictions on where the top free agents and players on the trade block will land. I will also be releasing more recaps on the Patriots and my middle school’s basketball teams, so check back soon.