Training camp is here, and it’s time for my final batch of NFL Draft Report Cards.  Last time, I reviewed the AFC South, where several teams struggled.  But the AFC West had some teams with much better draft classes.  Who are they?  Keep reading to see my grade for each pick as well as my final grades.  As I post more articles, I will also include links to the rest of my draft grades. 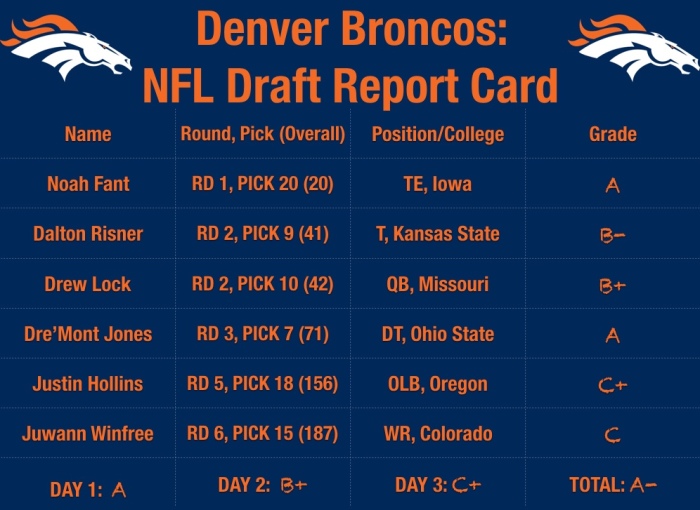 The Broncos put together one of the league’s best draft classes. The trade down in Round 1 was very smart, as Fant fills a huge need and was an amazing fit. They added a tackle (Risner) in Round 2, and if he can make a successful move to guard, he could really help the team. Lock was a bargain as well, and Dre’Mont Jones will fill another big need for Denver. The Broncos could’ve added more secondary help and another WR, but every pick had a purpose, and with just six picks, they filled a good amount of needs.

The Chargers started this draft off very strong.  But they made some confusing choices later on.  They didn’t have too many needs to fill, and they filled them early.  Tillery and Adderley were great adds, and Pipkins was a reach but should still compete for a tackle job and have success.  Later on though, they reached a bit on several picks.  It was smart to take a QB, but Round 5 is too early for Stick.  They also reached for Tranquill, Broughton, and Egbule.  Still, LA filled their needs earlier and more efficiently than any other team, making for a strong draft class where the later rounds didn’t matter nearly as much.

The Chiefs reaches on a handful of these selections, but they did filled a decent amount of needs.  They boosted the interior o-line.  They drafted extra RB and WR help.  They even added a safety with their first pick.  But even with Frank Clark on the roster, the Chiefs’ biggest need for an edge rusher, and that need has yet to be filled.  That fact, alongside the lack of interior o-line depth and the numerous reaches the Chiefs made, brings down KC’s grade.

The Raiders went into this draft with a handful of defensive holes and a few offensive holes as well.  They filled most of these, but they took players that they could’ve drafted in later rounds.  If they had traded down a couple times, they would likely have more help at guard and defensive tackle than they got, and they’d get some of their targets at better values.  Clelin Ferrell could’ve been taken at #24 or #27.  They took him at #4.  The Raiders did have some really good picks as well though.  I liked the choices of Trayvon Mullen, Foster Moreau, and Hunter Renfrow.  But they could have done a better job at managing their draft picks and focused more on value.

That’s all for my 2019 NFL Draft Report Cards.  Stay tuned for more NFL coverage as the regular season looms.