On July 10th had the opportunity to co-host a Boston Herald radio show called “The Rundown” with John Sapochetti and Jet Striar.  I was invited by the Herald editor-in-chief, Joe Sciacca, who has been so generous to me these last few years, giving me an incredible tour back in 2015 and also inviting me back twice to do mini internships for the last two summers.

I had first met John Sapochetti in 2015 when I did my first mini internship at the Herald.  He is one of their most well-known sports talk radio personalities so I was really excited to learn that I would be his guest co-host.

We arrived at the Herald about 45 minutes before the show to discuss the on-air topics we would cover.  John greeted us in the Herald lobby and we sat in a break room near the newsroom and the radio studio.  I told him about my recent experiences covering the Special Olympics USA Games in Seattle and my experience at the Red Sox game I attended the night before.  I had taken some notes at the game that I used on the air later on.  I also met his intern, Will Finley, who is also a huge Boston sports fan and specializes in sports research.  He had an impressive amount of stats that I found inspiring.  Shortly before we went on the air, I met John’s co-host, Jet Striar, an NBA guru and also a Boston sports fan.

As I walked into the studio, I also met the show’s producer, Christian Burgoyne.  You may hear him make comments in the highlights from the show that I put in this blog post.  Moments later we put our headsets on and the show began. 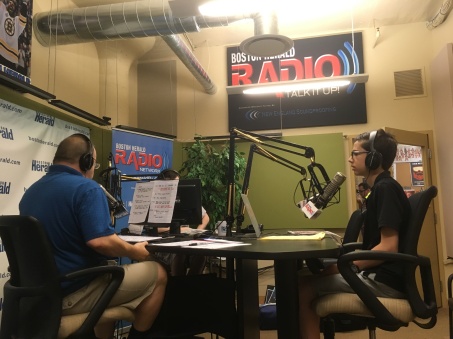 In the first segment, John introduced me to his audience and we talked about some things I noticed at the Red Sox game the night before.  After that, I took a quick break while John and Jet hosted a political guest, Luke Vargas.  It gave me a breather and a chance to reflect on how I did early on in the show.

When I returned, we talked about the All-Star Final Vote and how David Price has not met the expectations of the Red Sox fan base after receiving a 7 year, $217 million dollar contract.  Towards the end of the first hour,  we discussed J.D. Martinez.  He did not have a lot of suitors and he was underrated during the off-season.  I think that made it easier for Boston to sign him and so far the signing looks like the best Sox signing/acquisition since Chris Sale.

Below are some of the highlights from the first hour of the show:

In the second hour, we started with a continuation of our earlier baseball discussions.  We talked about what the Red Sox and Yankees might do at the trade deadline and how despite the fact that the Sox may catch a break with their easy schedule ahead, their next big test comes August 2nd against the Yanks.  The Yankees could upgrade their roster by then but the same could occur with the rest of the AL’s top teams, making the American League even more of a league of extremes as I mentioned later in the segment.

During our final segment we discussed some trending NBA off-season news like the Marcus Smart to Sacramento rumor.  We also talked about LeBron James’ signing with the Lakers, Portland’s need for another guy up front, Carmelo Anthony, and Kawhi Leonard.  At the end of the show, John thanked me for being on then I told him it was an honor.

Being on a live sports talk radio show was so surreal, which is why I’m so glad Christian gave me a copy of the whole show to listen to again and create highlights from the unbelievable experience.  I was on air for so much of the show that I had to break up the highlights into two 15-minute segments. 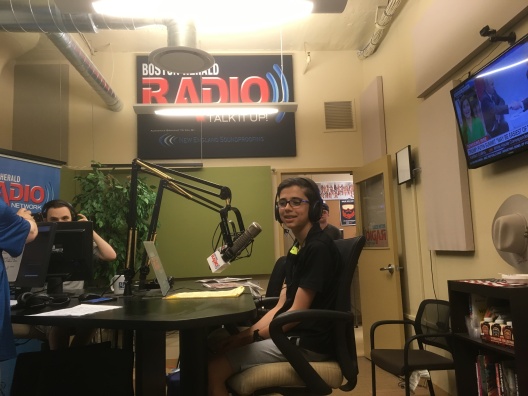 Check out the second segment below.

I’d like to thank Joe Sciacca, John Sapochetti, Jet Striar, Christian Burgoyne, and Will Finley for making this experience possible.  Stay tuned for a more baseball posts coming soon including Bravehearts-Rox game experience from the press box.  For now, I’ll be taking a week off as I have more broadcasting training at Play-By-Play Sports Broadcasting Camp.