This past week, I had an amazing chance to see what’s it’s like to work as a journalist at the Herald.  Not only did I see how the newspaper works, but I had a full multimedia experience by observing both a radio show and video for the website.

I started on Wednesday morning, and I got up early and caught the 7:30 train for my first commute. I arrived at the Herald a little bit before 9:00 and Editor-in-Chief Joe Sciacca’s assistant Barbara Long met me in the lobby.  She gave me an extended tour, and we read the paper.

Barbara told me, “When people come in, the first thing they do is read the paper.”

Once we were done, I met an editor and radio host, Zuri Berry.  I spent the morning observing Zuri and then eating lunch with him.  He was working on editing the other interns’ articles and looking for news that had been sent to the special Boston Herald inbox.  One of the interns, Peter, was an 18 year old sports fan going to Auburn in the fall.  Zuri told me that someone always has to keep an eye on the Herald email account to see if any news was sent to them.  Although my passion is sports, Zuri told me that journalists need to keep on top of all news.

In the afternoon after Zuri prepared for his radio show, I sat with managing editor Joe Dwinell and he showed me all the drafted articles on the website waiting to be edited.  Then the sports editor Sean Leahy showed me the sports budget that would be presented at the news meeting.  The sports budget shows what articles will fit into the space allocated for the sports section. During the meeting, I presented the entire sports budget!  One of the articles I presented even made the front cover.  It was about Tom Brady’s 40th birthday and what it meant for his career.  After the news meeting, it was time for me to go.  It was a great first day.

When I came in the next day, I saw the article I presented on the cover as I read the paper.  As a gift, they gave me a poster of the Herald’s front cover from the day after Super Bowl 51.  The headline was “Roger That” with a picture of Tom Brady holding the Lombardi trophy.

By the time I was done reading the paper, sports editor Rachel Fox was there and I spent the morning with her.  She had a TV by her desk and I put on SportsCenter while she looked at what sports articles were going up on the website.  At noon, I went with sports reporter Meredith Gorman to a birthday party for Tom Brady at Faneuil Hall.  TB12 wasn’t there, but there was a goat with a Tom Brady jersey! 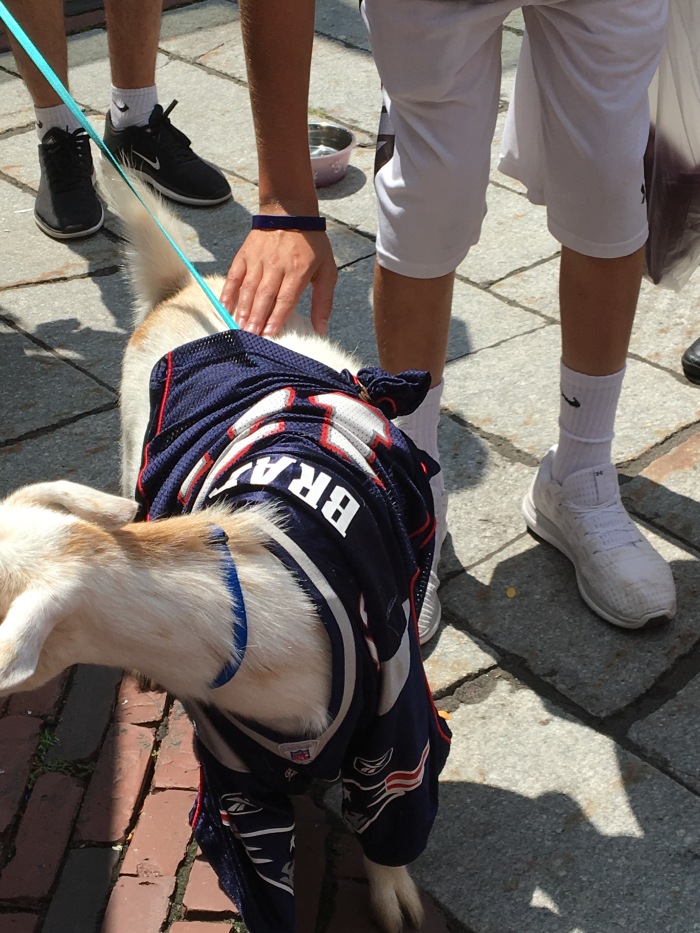 Meredith picked up lunch for us at Quincy Market and we took an Uber back to the Herald.  After lunch, I sat in on Zuri Berry’s radio show and observed in the radio control room for a bit.  It was a great experience to see the radio show in action.  I stayed with Zuri until the 3:30 news meeting, where I listened and took notes.

For my third and final day, I came in right at 9:00 and read the paper.  The Red Sox recap and Pats camp notes were the most interesting to me, especially since the Red Sox won in a high scoring game, 9-5.  After finishing the paper, Barbara let me use her computer to write an article for my blog.  Once Zuri Berry had arrived and read the paper, I spent the rest of the morning with him.  I stayed with Zuri to watch the first hour of his radio show.  Later, I went to see the sports budget that Sean had made and attented the 3:30 news meeting for the third straight day.  At the meeting, I presented the Patriots articles planned for the sports section.  Before I left, I talked to Joe Sciacca about the great week for a bit and said my goodbyes to Sean, Zuri, Barbara and everyone else.

I learned so much in only three days.  My favorite part was learning how the Paper came together each day.  I can’t wait to come back and learn more.