Below is Episode 5 along with some upcoming key dates, links to previous episodes, and my voiceover recap of the day.  You can find all Gonk Knocks coverage here.

Today was the Real Deal as for this practice on August 23rd, the team put on full pads for the first time.  The players participated in their first full contact drills.  Over the next two days, practice will be like a “dress rehearsal” for their first scrimmage on Saturday, August 25th in Clinton.

Coaches had players in some head to head match-ups that was as physical as real game action.

Like the last several practices, the team broke into defensive positional groups for drills in each of the first two full pad practices.  The defensive lineman and linebackers worked on blocking, faced off in head-to-head physical match-ups, and simulated blitzing.  They did this by attaching a football to a hockey stick and pretending it was the quarterback.  One of the coaches would move the hockey stick and the players would chase it.

The defensive backs practiced man coverage and tackling.  In their first day in full pads, the defensive backs flourished, especially captain Sam Crain, and junior Will Ji.  With a new defensive scheme this year, can some of the early success with the CBs be related to DB Coach Tyrone Notice’s unique drills?

The defense overall was strong on both Thursday and Friday.  DE and senior captain Chris Santana was one player who shined on defense.

Chris Santana and the other three captains are embracing their roles as leaders on the team and it shows.  Another emerging leader on the team is junior and starting center Ryan Carmody. His energy remains high and he continues to help and encourage his teammates.  He even taught another center on the team how to improve their snap.

On the field, RB Thiago Filadelfo had an amazing day Friday.  Thiago, a Junior, is really fast and his running style complements the rest of talented running back unit.  At the start of the day Thiago had a very physical matchup against Sophomore Pedro Ribeiro.  Thiago had a lot of great running plays throughout the day.  But Thiago wasn’t the only running back with a strong day.

There are several running backs fighting for playing time on Friday nights, and the entire Algonquin RB corps shined throughout the day Friday.

While the running backs dominated in 11 on 11, the wide receivers went into some positional drills.

The competition with tight ends Derek Blanchard and Chris Pacios and is heating up and it shows as both have worked hard and are improving every day.  I captured some really good TE action, first with Derek at TE and then with Chris at TE.

The first two days in pads was a success for the team and it was great to see some very competitive 11 on 11 drills as they prepared for their scrimmage on Saturday.  The coach opted not to hold the conditioning test in either of the first two full pad practices, but the team did some extra conditioning.  On Friday, they alternated between push-ups and running.

The team takes on the Clinton Gaels and Bartlett Indians in their scrimmage at Clinton High School tomorrow, August 25.  Stay tuned for the next episode of Gonk Knocks where I report on the scimmage. 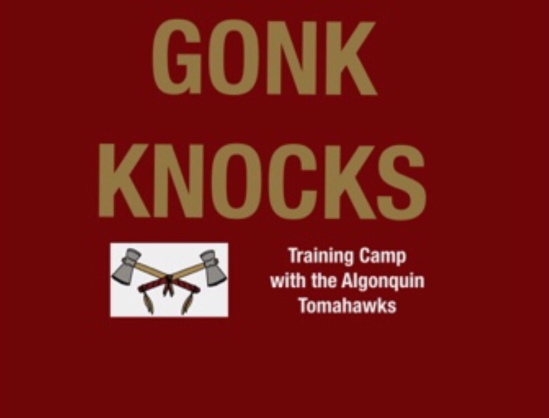 Below is Episode 2, along with my voiceover recap of the second day of football activity at Algonquin, August 18th.  In case you missed it, Click here for Episode 1.

On Day 1, Coach Allen set the bar high for the team’s expectations. On Day 2 the team looked to improve upon the strong day 1 start.  One thing that helped was practicing outside.  Unlike Day 1, no portions of the practice were in the stuffy and cramped gym.

However, it was another very hot and humid day, which did make the practice even harder.  Plus, they faced their toughest challenge yet on Day 2, conditioning drills.

Without the threat of thunderstorms until later, the team spent their entire 2 hour practice outside on the practice field next to the game day field.  The team practiced more plays today which was easier to do on the field with cleats on the grass as opposed to the hard gym floor.

For this year the coaches decided that players would only need to pass the conditioning test once.  Today was the first time players had the chance to pass the test and it was done near the end of a hot and grueling practice.  Fortunately, players were not in full pads.  Instead it was helmets, burn the boat t-shirts, and shorts.  The conditioning times that they had to meet were very tough but it was clear that this group of players have worked hard all summer and would give it their all to pass on Day 1.  The test was an individual test but players were tested in positional groupings as the time thresholds were different based on position.

The energy and team building is already noticeable as I saw players rooting each other on, even moments after running the drill themselves.  The conditioning is key to make sure the players are ready for the season and Coach Allen sees it as a great way for teammates to have friendly competition and motivate each other to succeed.

It was not easy for the players to achieve their targeted times in the hot sun after nearly 2 hours of practice.  Not everyone met their goal on the first day of conditioning.

But being out in the hot sun just helps the team get used to the tough workload and motivates them to improve and be ready for the next practice and conditioning test on Monday.  I spoke with Junior and Center Ryan Carmody, Senior captain Sam Crain, along with coaches Taylor Allen and Tyrone Notice after practice (See the video for my interviews).

I also had the chance to speak with a few members of the freshman team about their practice in the heat.

The team takes a day off on Sunday, August 19, but they’ll be back at it on Monday.  There is still a lot of hard work ahead of them leading up to the regular season opener on September 7.   Coach Allen stayed after practice to shake hands with some of the players and recognize them for their efforts so far.   They are making progress every day and it’s been really exciting to watch this team come together. 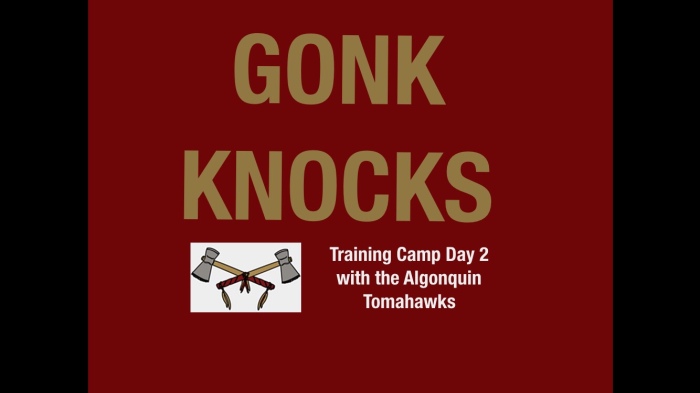